Work began on the Masters of Sighisoara III in March 2013.

The preliminary release date was first set to be the 31st of December, 2015.

Unfortunately, in order to be able to continue to ensure at all times the release of a high quality product,

truly set in our own "MoS-standard", we had to postpone four times the release of the Third Campaign.

Please continue to scroll down to read more about the Gyondrian's Tale Campaign.

For further information, you can contact us by sending a message in our thread

on the CH web site or seeking up the frequently updated Masters of Sighisoara Facebook page.

Many years ago, a 100 year long war raged between the mighty Archmages of Jarall and their neighbours, the Titans of Monale. The Titans were tired of witnessing too high a number of failed experiments conducted by the Wizards and their students at High Gryffondale, one of Sighisoara's most prestigious schools of magic and scientific occultism.

The war started after the school had accidentally set lose a fierce Dragon known as Malestos who was to ravage the lands for a long time. The Wizards eventually managed to banish Malestos from the land, but a lot of damage was caused before the creature was chained and tamed, albeit temporarely. The Titans grew tired of the recklessness of the Arch Mages and as a consequence a war of great scale came to be between their respective nations.

In the middle of all this misery were the Dwarves of Benrolas who used to live in the same island next to their Wizard and Titan neighbors in what could be best described as armed peace. When the war started, a lot of the Dwarves died having been caught in vicious crossfire in the brutal fighting between the armies of Jarall and Monale. Many more of their kin were forced to flee to the continental side of the vast Sighisoara's mainland.

The war lasted for a 100 years and ended with a general peace conference which finally divided the contested territories between the powerful two warring realms. Today the Titans are allied to the Mages offering them military assistance in times of trouble should the need arise (although the latter are very much capable of defending themselves, making this alliance one of, if not the strongest in all of Sighisoara) and the dwarves were granted a small patch of land along with self-rule. The Wizards built long distance teleporters to be able to banish their experimental creations to Radria, a land which used to be a home away from home for many a Wizard and Mage.

Main storyline of the Third Campaign[]

Charles, a young man living on the island of Gyondria in the far north west sets out on a journey. Not only will he be exploring his inner self on his way from a boy into a man, but he is to explore the many islands of Sighisoara. After meeting with Lord Nimae, the richest man of Gyondria, Charles aquires his first ever quest and leaves on an adventurous journey that will take him on to the most distant of places...

Masters of Sighisoara III - A Gyondrian's Tale was finalized and then released to the public in October 2016. Although we did suffer some setbacks and delays during the three-and-a half-year development, the team is very proud of the finished product and is happy to share it with the audience.

In the Campaign you will get a chance to explore the story of Sighisoara and its surroundings in an all new way.

A lot of work has been put into making the storyline as complete as possible with information of years, Kings, and such all been taken into careful consideration. The Team is working hard together to bring you an experience with as much perfection as humanly possible. Research has been done in all of the other campaign maps and scenarios to locate all the small story bits which form the basis for an in-depth Sighisoara lore.

Custom made music featured in the Third Sighisoara Campaign (composed by Paul Anthony Romero, Per Pouraskari and Jim Nordström)[]

Those of you finding this page through either the Age of Heroes or Celestial Heavens forums know that I (HoP) did in fact leave you with a clue to be poundered. It was very vague and only left you with the letters PAR.

Kalah, the admin of the Celestialheavens was amongst the first who figured it out (as he was given some extra hints in a personal message), but indeed this stands for none other than Paul Anthony Romero. He produced a custom song for our Campaign which fits very nicely into the main storyline. He is one of the most inspiring persons I (HoP) have ever talked to. Not only is he a great composer well known for having composed original soundtracks for the Heroes of Might and Magic and Magic series, but he gracefully decided to help the Team free of charge. THANK YOU PAUL!

Taken from the wikipedia entry of Paul Anthony Romero:

"Romero taught himself to play the piano at age of three. He began his formal piano and composition training at the age of 9 and made his concert debut when he was 11, playing a Mozart piano concerto with the Santa Monica Symphony Orchestra. He composed his first original piano concerto at the age of 13. This concerto was premiered by the United States National Symphony Orchestra of Washington D.C. under Mstislav Rostropovich, with Romero as the piano soloist. The premiere took place at the Kennedy Center and was followed by an encore performance at theUnited Nations General Assembly Hall in New York City. The concert was televised around the world and brought him international attention as a young composing prodigy. The Yamaha music label recorded the concerts, a CD which is still available in Japan.

At the age of 16 he received a full college scholarship to the Curtis Institute of Music in Philadelphia, Pennsylvania where he studied composing under Pulitzer Prize winner, Ned Rorem. He also studied piano under Vladimir Sokoloff, Jorge Bolet, and Chamber music with members of the Guanari String quartet. He finished his musical training at the Conservatoire de Paris in France and the Guildhall School of Music and Drama in London England.

He has performed in cities such as Tokyo, London, Paris, New York and Washington D.C. Some of his concert highlights have been performances at the Walt Disney Concert Hall in Los Angeles, California, the Mexican Embassy in Washington D.C., the Palace of the France-Americique Institute in Paris, Carnegie Hall in New York, and two performances at the Gemeldiche Museum inBerlin, Germany as well as one performance at the Berliner Philharmonie. His latest CD, "An American In Paris", features his live performance in Paris of George Gershwin's Rhapsody in Blue."

"Romero has composed over 70 original soundtrack film and computer game scores, including the orchestral/operatic/choral scores for the New World Computing/Ubisoft computer game series,Heroes of Might and Magic. So popular are the scores that Romero is obliged to compose his first symphony based on the best musical themes from his "Heroes" soundtrack scores. His Symphony No. 1, entitled "Heroes" will be completed in 2008.[dated info]

Romero is also the composer of the Sony Online Entertainment fantasy-themed massively multiplayer online role-playing game (MMORPG), EverQuest. He won the Broadcast Music Incorporated(BMI)-Jerry Goldsmith Film Composers Award as well as receiving two National Endowment for the Arts (NEA) grants. Two of his original scores for the Heroes of Might and Magicseries have been listed in GameSpot Magazine's All-time top ten computer game scores. The CD soundtrack collection from the complete Heroes series was released in January 2008 by Ubisoft.

Romero will be featured in a new Sundance Channel Documentary film, "The Gift", a feature-length documentary about classical musicians who were former child prodigies."

A sneak peek unveiling more than the eye may first meet!

Here you can listen to the score Paul Anthony Romero composed for the Sighisoara team, who are forever grateful for such an inspiring track. We wish to take the time to Thank You once again for the splendid gift Paul. The tune is truly an amazing piece of celebrating fantasy and epic battles.

Pictures from the development of the Campaign[]

Please note that the pictures shown here come from early sketches when ideas were just beginning to take form.

Compared to its predecessors, MoS III focuses more on the general aesthetics and beauty of the maps, has a greater variation of terrain, much deeper storyline and at times quite a challenging gameplay on top of it all which serves to ensure that the player will be entertained for countless of hours to come. For King and Country errr Sighisoara!

Can anyone guess which island this may be? Hint is the majestic waterfalls.. 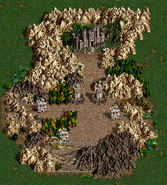 Beware of the Troll King Perko 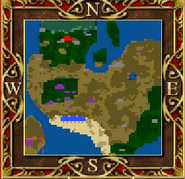 Showing the variation of terrains, and more thought of design of the maps.

Yet another photo trying to show that this time, it is not all grass!

The ruins of Paal Gran, first version (About 50% finished).
Community content is available under CC-BY-SA unless otherwise noted.
Advertisement